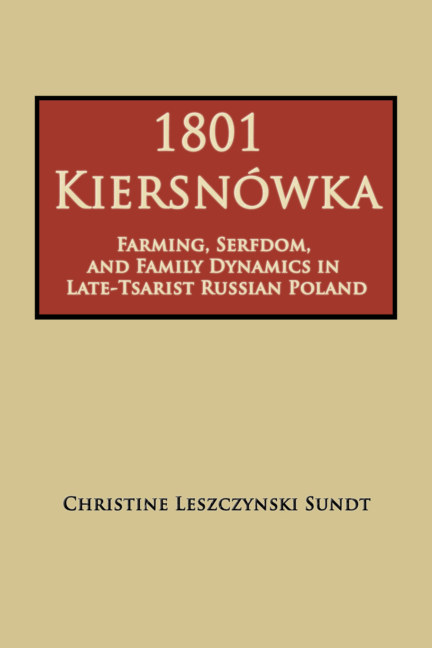 Polish peasants in 1801 were serfs, indentured laborers under the Rus­sian tsar's stronghanded yoke. Their lives and livelihood were deter­mined by strict requirements that were formally set down on ledger sheets for their villages. The 1801 ledger for Kiersnówka, a farming commune located in northeastern Poland in today's Podlaskie voivode­ship, named sixteen farmers and their expected duties for their noble lords. Who were these farmers and what do preserved documents that described births, marriages, and deaths tell us about these men and their families?

This report focuses on nine surnames listed on the ledger sheet: Sop­kowski, Milewski, Jarmoszko, Piekutowski, Bieciuk, Radkiewicz, Hromko, Klimowicz, and Stankiewicz. Records reveal that relation­ships between and among these families were complex and tightly in­terwoven. Marriage practices in Kiersnówka, as in other small and rig­idly controlled rural villages in Poland, mirror similar conditions and outcomes that have been found on small islands and remote locales worldwide.

Starting in 1801 and following the life events of these sixteen families into the 1860s, a rich tapestry of village life can be gleaned, even though the documents drawn from ledger entries in Roman Catholic church archives (discovered in the geneteka database, a project of Polskie Towarzystwo Genealogiczne) are limited, often incomplete, and infused with errors.

This is a revision of the June 2021 edition.