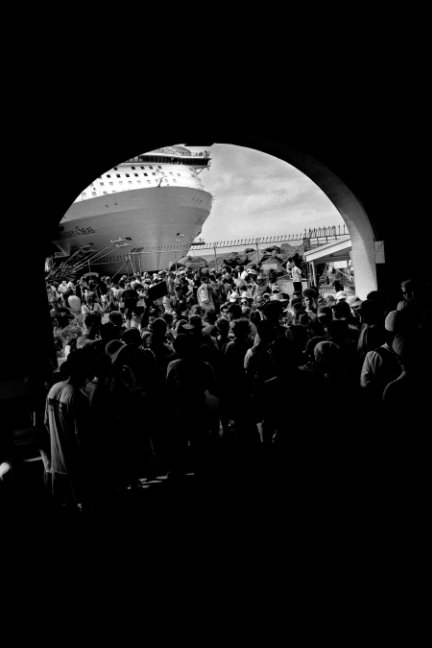 The voyage that Pierre Gély-Fort invites us on has more in common with a nightmare than a pleasurable experience.

On this bunker-like cruise liner, the passengers resemble convicts trapped in a fake environment, where boredom and satiety are rife.
The travelers greedily give themselves over to selfies, blissfully unaware that the surrounding environment resembles a cardboard stage set, an opulent mirror that serves to reflect social success and material happiness.

The ship is so immense that it completely occults the entire field of vision. We see nothing of the outside landscape, barely glimpsing a piece of sky or sea. Like Patrick McGoohan in The Prisoner, the prison island that is this ocean liner, is all that the occupants have the leisure of strolling, contemplating and consuming.

For these travellers, dreams of any other kind appear not only as forbidden, but also futile. On this ship, where the sheer scale anesthetizes everything off-screen, the passengers seem to renounce their individuality upon embarking, in order to fit into the mould of a privileged class. The only condition is to be happy!

Beyond their apparent innocuousness, Pierre Gély-Fort’s photographs offer an uncompromising look at a world where everything contributes to reducing human beings to the rank of naïve, servile consumers.

At the opposite extreme of a photo-journalistic report, and as if endowed with a scalpel, Pierre painstakingly dissects his very personal vision of an incandescent pallor. Abandoning the colour that characterized his earlier poetic journeys to distant lands, here, he has opted for a radical black and white that is highly contrasted, almost clinical.

The aim here is not to magnify or humanize the story, but instead to demystify this cruise experience, enjoyable for some, undoubtedly, but evocative of fish trapped in a bowl.

A photographer and creator of books, with a penchant for visual worlds, rich in colour, Pierre Gély-Fort extends his love of travel through the books he designs & lays out himself. Without texts or legends, the geographical locations become the pretext for an artistic expression steeped in Expressionism, outside of a traditional narrative documentary or photo-journalistic document. The objective is to distort reality to inspire the spectator with an emotional reaction. Interaction with the reader is sought first & foremost. Pierre Gély-Fort is a Frenchman, born in Algiers, who has lived in different parts of the world for over 25 years: Asia, Eastern Europe, & Scandinavia. He studied at Les Gobelins (Paris) and took a number of masterclasses with Klavdij Sluban. An encounter with Agathe Gaillard encouraged him to pursue his passion for creating artist’s books. Pierre Gély-Fort takes his inspiration from colour photography & the artistic evolutions of colour analog film photography.